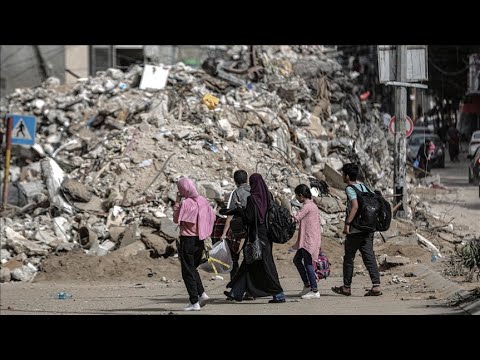 Mr. Abunimah says there’s conspicuous consumption in Palestine but the reality for the vast majority in the West Bank and Gaza is increasing poverty.

This is an episode of Reality Asserts Itself, produced May 18, 2014. 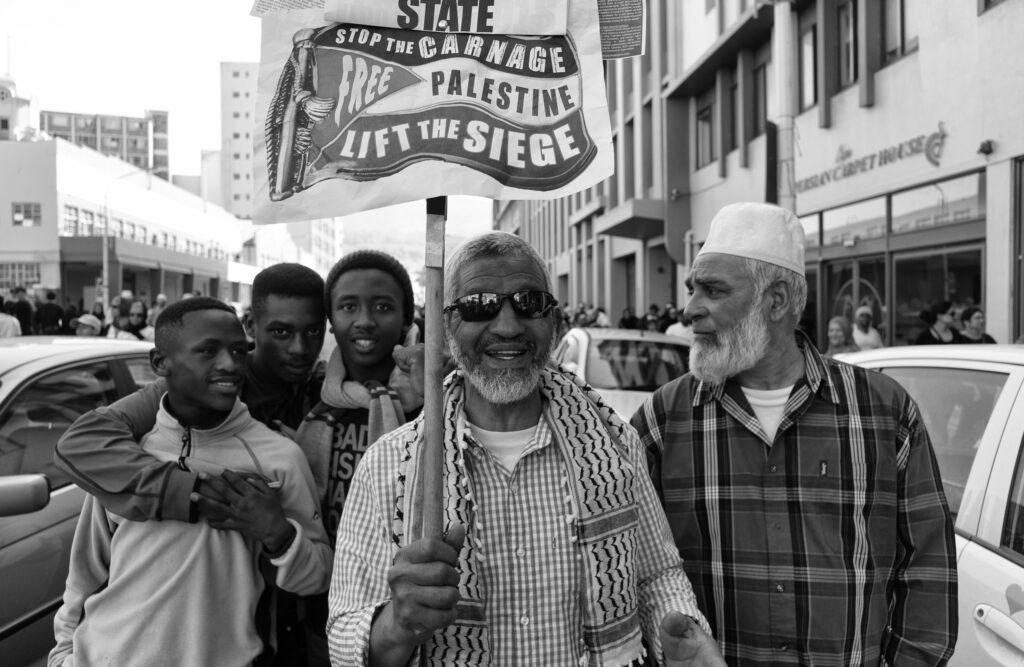 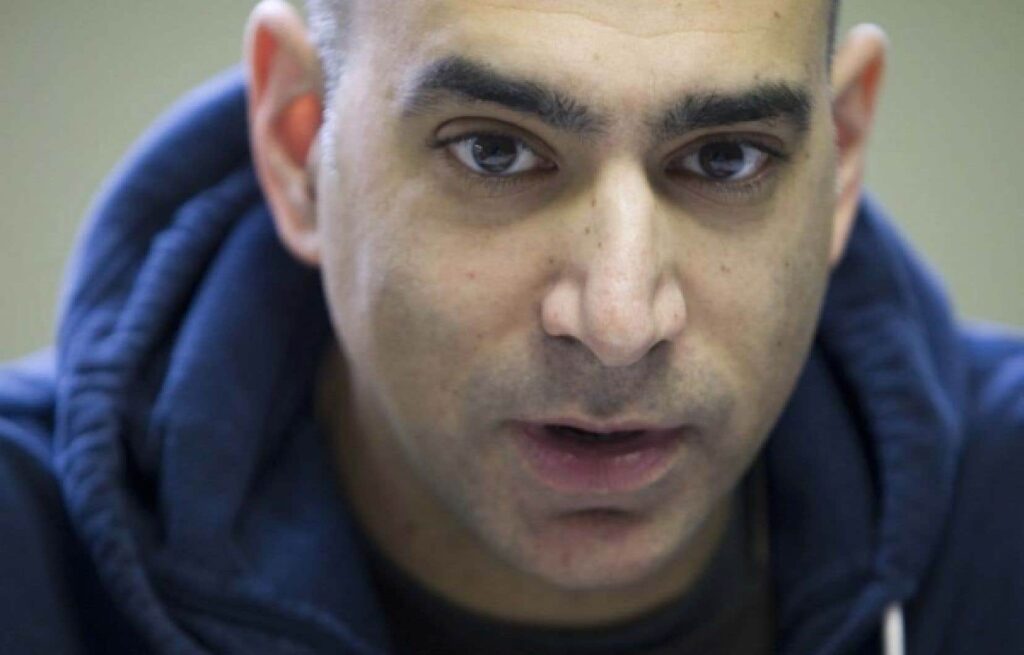 We’re continuing our discussion with Ali Abunimah. He’s the cofounder and executive director of Electronic Intifada.

JAY: So Ali’s latest book is The Battle for Justice in Palestine. In 2006 he wrote One Country: A Bold Proposal to End the Israeli-Palestinian Impasse.

So, as I mentioned at the end of the last segment, when I was in Ramallah–I guess it’s about three years ago or four years ago–I was kind of taken aback by how wealthy parts of Ramallah look like–in fact, cranes everywhere, and there’s buildings going up and apartment buildings. And you go to one area where some of the Fatah [elite?] government, but others–a lot of buildings, I think, are owned by Palestinians, emigres, who made a lot of money abroad and are buying condos and buildings. Anyway, it looked kind of like Beverly Hills. And so talk about the sort of struggle within Palestine itself about where Palestine is headed.

ABUNIMAH: Well, you weren’t the only one who had that impression. And, in fact, in the past couple of years, there was a whole genre of–really started by Thomas Friedman, the New York Times Columnist, of going to Ramallah in particular and declaring an economic miracle and saying, you know, there’s wealth, there’s development. And all this was sort of harnessed to a narrative that the Palestinians were moving steadily and pluckily towards statehood and building the foundations of a Palestinian state. And it was an entirely bogus narrative.

The reality is, what you saw in Ramallah is the fruit of a very small elite that has gotten very wealthy. And these are people who benefit from, you know, sort of the revolving door of the Palestinian Authority and a few very large conglomerates that control vast sectors of the economy. And they’re living ostentatiously. There’s a lot of conspicuous consumption.

But the reality for the vast majority of Palestinians in the West Bank and in Gaza was increasing poverty, increasing dependence on humanitarian aid, as the productive base of the economy was systematically destroyed by Israel in Gaza, and also in the West Bank, and mass unemployment. And, you know, you had Hillary Clinton going over and declaring that, you know, new businesses are opening and new jobs are being created. It wasn’t true. Unemployment kept going up. And I wanted to bust this false narrative in the book and show that actually what was going on was this small elite, aided by the United States and working pretty closely with Israel, getting rich, and actually increasing Palestinians’ dependence on Israel and increasing–helping Israel increase its control over the Palestinians’ economic life while wrapping it in the Palestinian flag and declaring that, you know, a five-star hotel in Ramallah is somehow a step towards Palestinian sovereignty and independence. And there was this very sort of–this sense that, you know, whatever is good for business and good for investors is somehow good for everybody.

JAY: Yeah. This is trickle-down economics, except it doesn’t trickle down.

ABUNIMAH: It’s what Arundhati Roy has called gush-up economics. And that has proven very effective in India, in the United States, and in Palestine. And, you know, we don’t talk about it in Palestine. We talk about, you know, borders and land and settlements and refugees and all those things that are, you know, absolutely fundamental to people.

But what I also wanted to point out is that all this is also going on just as it is everywhere else in the world. The Palestinians have to find a way to tie their struggle for economic democracy and social justice to that global effort.

ABUNIMAH: I don’t know if they like the status quo. I think it’s fair to say that they have benefited from the status quo. And I think it’s true that they don’t know of any alternative to the status quo, because they bet all their eggs on, you know, the idea that there’s going to be a Palestinian state in some form and they would inherit the state, they would be the oligarchs of the new state. You know, the oligarchs of the Palestinian Authority would naturally become the oligarchs of the new state, and if that’s taken away from them, then what? And so that’s why they have to keep–you know, no matter how absurd it gets, you know, they have to keep extending the peace talks, even though nobody believes they’re heading towards a Palestinian state, because what’s the alternative?

But I do think that, you know, sort of one of the, let’s say, good news stories is that, I think, Palestinians are more and more recognizing this and they’re fighting back in various ways. And one is to, you know, maintain control of their–you know, for example, their fair trade and farmers cooperatives that are trying to maintain their presence on the land, trying to create new markets for Palestinian goods that don’t have to be tied into or dependent on these neoliberal structure. I mean, just to give one example, one of the most disturbing things that I came across is this plan, and they’re being sponsored by Germany, Japan, and France. They’re sponsoring these industrial zones in Palestine.

And, again, this was all marketed as building the state, building the economy, creating jobs. But what they’re actually doing is creating these extraterritorial zones where Israeli and international companies can come in, get cheap workers. There’s no protections for workers’ rights. There’s no environmental protection. Israel is already using the West Bank as basically a toxic dump site and moving its dirty industries there. This is only going to get worse if the World Bank and IMF-type schemes continue. And these industrial zones, they hand them over to private companies, who then have the right to set up private armies, and nobody can come in without their permission, no Palestinian officials can come in. So in essence you’re going to have private corporations on Palestinian land who have more sovereignty than the Palestinian Authority. And they don’t have to pay taxes. They get, you know, export/tariff-free access to world markets. And this totally undercuts and destroys indigenous Palestinian businesses. This is what’s happening now.

And so part of what I want to do is sound the alarm and say, you know, heaven forbid Palestinians get a state, because if they do, it’s going to be as ugly or worse than what they’re already going through. And it’s all going to be wrapped up and packaged with a ribbon from the IMF and the World Bank, who are going to say to Palestinians, what are you complaining about now? You got what you wanted.

JAY: It’s kind of what the Israelis say to the people of Gaza: you wanted us out, so we got out. Of course, we left you in unlivable conditions.

ABUNIMAH: Not only did they leave Gaza in unlivable positions, but as I, you know, say in The Battle for Justice in Palestine, there was a systematic, diabolical destruction of the Palestinian economy in Gaza, to the point where Israeli military planners were calculating, you know, if we reduce the agricultural inputs that come in by this much to Gaza, then we will reduce, you know, within a certain period of time, the production of fruits and vegetables by 50 percent. And, you know, in 2008, 2009, Israel deliberately bombed and killed 100,000 chickens in Gaza. Well, you know what? When I went to Gaza, the supermarkets there were full of Israeli frozen chickens. But it’s only very few people in Gaza who can afford that.

JAY: Just to go back to your earlier point, God forbid if there is such a state, because it will be a state that manages this colonization, which is kind of what the Palestinian Authority is now. So it would be calling what’s happening now a state and continuing to manage it, more or less in the status quo. But then why don’t the Israelis want that? I mean, why don’t they just make this deal? Because it seems there to be had and it seems like the Palestinian elites are willing to play this role, at least enough of them. So why don’t the Israelis just do this deal?

ABUNIMAH: I think the logic of Zionism historically has never been–there’s never been a point where the mainstream of the Zionist movement has said, enough land. And there’s nothing within Zionism that puts the brakes on the colonization of land. Zionism began as a colonial movement. In those days colonialism wasn’t a dirty word, so they, Zionist leaders themselves, said, we’re colonizing. Now it’s a dirty word, but the colonization goes on everywhere–in the West Bank, in the south in the Negev, in the Galilee. And I don’t think there is internal brakes that can put a stop to this in Israel. And that’s why I think the importance of international pressure, international grassroots pressure in the form of boycott, divestment, and sanctions is so essential to bringing this process of colonial violence to an end, so that we can begin to actually build something that is livable for everyone.

And I think in the end it’s a very optimistic book. Omar Barghouti, one of the best-known boycott, divestment, and–.

JAY: Who we’ve interviewed on The Real News several times.

ABUNIMAH: Right. So Omar Barghouti said that the book offers educated hope. And to me that was in a sense the best compliment, because, yes, there’s–I write about a lot of things that are difficult and disturbing and painful, but ultimately it’s in the service of making an argument that radical transformation for the better is within our grasp in the next few years.

JAY: Okay. In the next segment of our interview (and last), we’re going to look at what does that reasonable hope–. Is that the phrase? Reasonable? Educated hope. What does educated hope look like in the eyes of Ali Abunimah? So please join us on Reality Asserts Itself on The Real News Network. 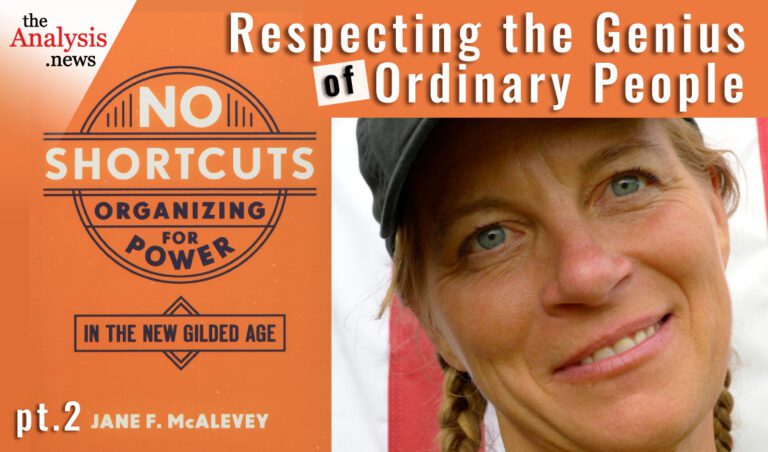 From Nicaragua to Tennessee, learning how to organize to win the right to dignity. The organizers’ organizer, Jane McAlevey on Reality Asserts Itself with Paul Jay.